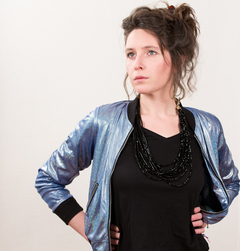 After studying at the Geneva Conservatory and the Universities of Bern and Berlin, punctuated by assistantships at the Schaubühne in Berlin and at the Théâtre Vidy-Lausanne, Manon Krüttli completed her training with a Master's degree in stage direction at La Manufacture in Lausanne.

In 2009, she created the company Les Minuscules with Charlotte Dumartheray and Léonie Keller, with whom she conceived several shows, before founding her own company - KrüKrew - in 2016 and staging ChériChérie at the Théâtre 2.21 in Lausanne. She also collaborates as a dramaturge for artists such as Luk Perceval, Andrès Garcìa or Emma Murray.

In recent years, she works regularly at POCHE /GVE where she directs the Quebec comedies Unité Modèle and Les Morb(y)des, Guillaume Poix's La Côte d'Azur, Katja Brunner's Too Short of Legs and Tennessee Williams' In the Bar of a Hotel in Tokyo. In 2019, she conceived with Jonas Bühler Le Large existe (mobile 1) at the Théâtre Populaire Romand (TPR), which is followed by a tour in French-speaking Switzerland.

During the 20/21 season, she signed the direction of the episode 2 of the theatrical series Vous êtes ici as well as that of the show Tout le plaisir est pour moi conceived by the actresses' collective OhOui! She presented the front of Le Projet Léger (Nidegger, Krüttli, Thébert, Bühler) - Généalogie Léger - at the Grütli as part of the Bâtie-Festival de Genève and will show the front - Miss None - in autumn 21.

Manon Krüttli is an associate artist at POCHE /GVE.