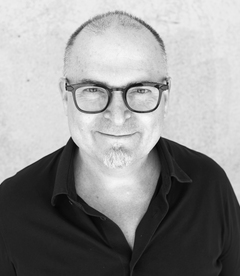 After training as a sommelier and then as a cook, Claude Ratzé trained as a socio-cultural animator in Geneva in 1985. In 1990, he was in charge of the programming of the Saint-Gervais Theater, then associated with the office of promotion and artistic diffusion Diagonal Promotion. In 1992, he was hired by the ADC (Association pour la Danse Contemporaine) as director, an association that he directed until October 2017. In this context, he was also in charge of production and diffusion for Noemi Lapzeson's company - Vertical Danse (92-95). From 1989 to 2001, he collaborates with the Festival de la Bâtie (press and promotion service until 1994, then responsible for the dance program 1994-2001). Seventeen years later, in November 2017, he becomes the director of the festival.

He teaches occasionally at La Manufacture, in the Bachelor Contemporary dance course in the program "Far from school" for first and second year students.