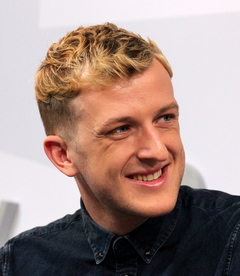 Édouard Louis is a writer. He has published four novels, En finir avec Eddy Bellegueule, Histoire de la violence, Qui a tué mon père and Combats et métamorphoses d'une femme, published by the Éditions du Seuil, which have been translated into some thirty languages and adapted for the stage and screen. He regularly gives courses and conferences in American universities and many cultural venues around the world.

He grew up in Hallencourt in the Somme region of France before entering a theater class at the Madeleine Michelis high school in Amiens. From 2008 to 2010, he is a delegate of the Academy of Amiens to the National Council of High School Life, then studied History at the University of Picardy, where he is noticed by the philosopher Didier Eribon.

From 2011, he pursues studies in social sciences at the École des hautes études en sciences sociales and at the ENS de la rue d'Ulm as an auditor. In 2013, he obtained to change his name and became Édouard Louis, taking as a first name the nickname given to him since high school, and as a last name the first name of the hero of the play by Jean-Luc Lagarce Juste la fin du monde. That same year, he edited the collective work Pierre Bourdieu: L'Insoumission en héritage at the Presses universitaires de France, an analysis of Bourdieu's influence on critical thinking and emancipation policies. In March 2014, he created and directed for the same publisher the collection "Des mots," devoted to transcripts of lectures, interviews, and short texts, whose first volume on Michel Foucault appeared in June, with contributions from Geoffroy de Lagasnerie, Georges Didi-Huberman, Leo Bersani, and Arlette Farge, among others.

That same year, at the age of 21, Édouard Louis published En finir avec Eddy Bellegueule, which won the Pierre Guénin Prize against homophobia and for equal rights. He regularly intervenes in the political field alongside Geoffroy de Lagasnerie. In 2016, they addressed an open letter to Manuel Valls, in which they accused him of not trying to understand the causes of terrorism.

He was also a signatory in October 2015 of the "call of 800" in favor of a reception of migrants more respectful of human rights and he participates in the press conference organized on this occasion at the Luxor, in Paris, alongside several other filmmakers, artists and intellectuals. In 2016, he published his second novel Histoire de la violence adapted and directed by Thomas Ostermeier in June 2018 at the Schaubühne in Berlin, and then Qui a tué mon père in 2018.