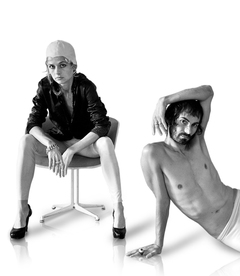 Delgado Fuchs is a Swiss collective formed by the choreographers and dancers Nadine Fuchs and Marco Delgado.

Outside of customary classification, half serious and half trivial, their creations play the register of ambivalence. They casually probe the various forms of identity and weave around the body a questioning on the principles of immediate presence, and those of directing and performing. Putting aside linearity, their sequenced language develops micro-narrations that become entwined and overlap to compose the framework of allusive tales, both intuitive and out of sync.

The duo’s work has been presented on the 5 continents, during tours that have brought them to 15 European countries, to the United-States, to Canada, to Japan, to Mexico and to Australia.