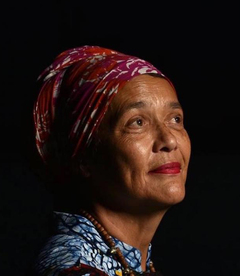 A political scientist, Françoise Vergès is interested in issues of slavery and colonialism, mainly in Reunion Island where her family is originally from. She has been a journalist and editor in feminist movements in France, is a graduate of UC Berkeley and has taught in the United States and England.

Her research spans many areas around processes of racialization and vulnerability, the politics of predation, and racial capitalism: memories of slavery, the writings of Aimé Césaire and Frantz Fanon, cultural and artistic practices in the global South, women's struggles and materialist and decolonial feminism.

She is also an author of documentary films, an independent curator, works regularly with artists and is active in political anti-racism movements.

Since 2008, she has been president of the Comité pour la Mémoire et l'Histoire de l'Esclavage, where she succeeded Maryse Condé.