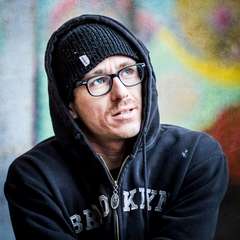 Nicolas Turon has been exploring the performing arts for over twenty years. He has been involved in collective creation, street theater, theater for young audiences, but also writing and radio. With his project Le Roman de la Rue, he has become the artist of the common word and the collective unconscious.

During these experiments, he continually follows the following axiom: to impregnate himself with reality in order to feed a fiction that will in turn have to return to reality, whatever its form (show, news, novels, urban rumor). He thus builds imaginary cities, including the one that adorns half of his body thanks to a tattoo.