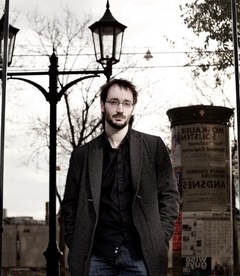 Born in 1979 in Lausanne, Jérôme Junod received his Bachelor of Arts (Philosophy, History, Oriental Languages) from the University of Lausanne, his Superior Certificate in Piano at the Lausanne Conservatory, and his Magister in Directing at the Max Reinhardt Seminar in Vienna.

Junod taught directing at the Max Reinhardt Seminar from 2012 to 2019, and has been a regular guest at La Manufacture since 2014. He collaborates as a playwright with Anna Maria Krassnigg, Michael Gruner, Sarantos Zervoulakos and Nicolas Charaux.

Junod is also a translator (Sophocles, Chekhov, Schnitzler, Schiller, Racine...) and author of a dozen plays, nominated in 2011 for the Stückemarkt in Heidelberg, invited to the Neue Stücke aus Europa festival in Wiesbaden in 2014, and holder of a playwriting scholarship from the Austrian Ministry of Culture in 2020.