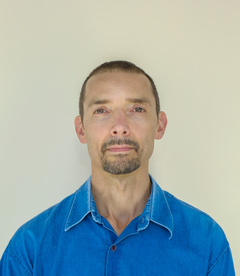 Born in Geneva in 1966, Dominique Falquet began studying martial arts in 1984 with Iai-do (the Japanese swordsmanship) under the guidance of Pascal Krieger in Geneva. This teaching, which is fundamentally based on bodywork, also incorporate the cultural, philosophical and historical aspects that transform a combat technique into a fighting art. In 1988, during a trip to Asia, Dominique met master P'ng Chye Khim in Penang, Malaysia, becoming his student and following his teaching of Chinese martial arts (SaoLim Chuan, Hsing-I Chuan and Taïchi Chuan) until the latter's death in December 2010. Since 2001, Dominique teaches Chinese martial arts at his club "YI-XIN" in Geneva. He also provides specific trainings for theater and dance productions. He has been working at the Manufacture since 2006 as a Taïchi teacher for the theater bachelor students, and since 2014 as a teacher of SaoLim for the contemporary dance bachelor students.