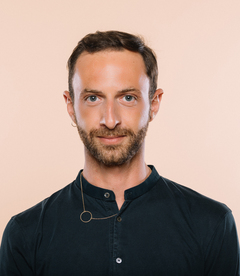 Kiriakos Hadjiioannou is a choreographer, performer, choreography advisor and curator. His work focuses on specific aspects of choreography, movement and space, touching different types of art. He's been collaborating with various choreographers, artists, filmmakers, researchers, in international productions. Next to many collaborations, he creates a series of works exploring altered and transcendental conscious states, called 'Higher States' (Higher States of Consciousness). He is working on educational projects and created works with kids and teenagers. He is also teaching in universities and schools, giving workshops and masterclasses on Choreography and Performance, Self-Staging & Group-Staging, Leading & Following. He is a guest teacher and choreography advisor at the University of Performing Arts "Manufacture - Haute Ecole Des Arts De La Scene" in Lausanne.

For 2014 - 2016 he supported by The Swiss Arts Council ProHelvetia, as part of the pilot project «YAA! – Associated Artist» in cooperation with the theatre Kaserne in Basel.

In 2017 he receives an award from the Swiss Federal Office of Culture - Swiss Dance Awards 2017, the June Johnson Dance Prize for his outstanding approach and the development of the project "Hyperion / Higher States, Part 2"(2017).

He graduated from the State School of Dance in Athens and studied Choreography & Performance (CUP) MA in Applied Theater Science at the University of Giessen.