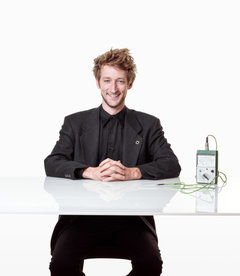 Maximilian Haft was born in 1985 in Sacramento. He studied violin at the New England Conservatory of Music with Masuko Ushioda and at the Royal Conservatory of The Hague with Vera Beths. He enjoys playing new music and has performed with Ensemble Klang (The Hague), Ensemble musikFabrik (Cologne) and Ensemble Contrechamps (Geneva). In 2009 he graduated from the Asko|Schönberg Ligeti Academy. In 2010 he received the HSP Huygens Scholarship and was a finalist in the Storioni Chamber Music Competition. In 2010 and 2011 he took part in the Lucerne Festival Academy during which he worked with Pierre Boulez and Ensemble Intercontemporain. Most recently he performed the solo part of Witold Lutoslawski’s violin concerto “Chain II” with the Noord Nederlands Orkest to critical acclaim. He performs regularly with The Hague String Variation, De Nieuwe Philharmonie Utrecht, Bern Camerata and the Metropole Orkest and has recorded for Mode Records, Hänssler Classic, Wergo, Musiques Suisse and FYO Records.