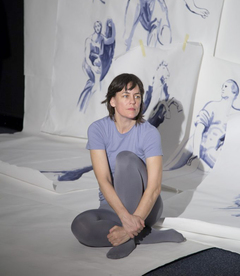 DD Dorvillier, choreographer, performer, teacher, artistic director, has been developing her artistic work in New York since 1989. In 2003 she received a "Bessie Award" for the choreography of "Dressed for Floating", and in 2010 for her performance in "Parades & Changes, Replays, Restitution" of Anna Halprin's play by French choreographer Anne Collod.

In 1991, she created a studio in Brooklyn, Matzoh Factory, with choreographer Jennifer Monson. For more than ten years, the Matzoh Factory was a recognized place of research and experimentation that attracted many choreographers and artists.

With her company "human future dance corps", she presented her work at The Kitchen Dance Theater Workshop, Danspace Project and PS 122, in New York, as well as at Kaai Theater in Brussels, ImPulsTanz in Vienna, DeSingel in Antwerp, STUK in Leuven, Hau / Hebel am Ufer in Berlin, Zagreb Dance Weeks in Zagreb, TSEH Festival in Moscow.