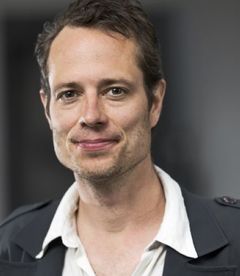 Stefan Kaegi produces documentary theatre plays, radio shows and works in the urban environment in a diverse variety of collaborative partnerships. Using research, public auditions and conceptual processes, he gives voice to ‘experts' who are not trained actors but have something to tell. This is how he directed “Mnemopark,” a model railway world in the Basel Theatre – a live film (set in 1:87 scale). Kaegi has toured across Europe and Asia for over three years with two Bulgarian lorry drivers and a truck which was converted into a mobile audience room (“Cargo Sofia”). In 2008, he developed “Radio Muezzin” in Cairo – a project about the call to prayer in this age of technical reproduction, and in 2011, “Bodenprobe Kasachstan” about migration and oil in central Asia.
Between 2006 and 2011, Kaegi often worked with argentinian playwright and director Lola Arias, most recently on “Chácara Paraíso”, which featured Brazilian policemen, and on “Airport Kids”, with global nomads between 7 and 13 years of age. Together they curated “ciudades paralelas / parallel cities”, a portable festival for urban interventions.
Since 2014 he adapts the immersive Audio Walk “Remote X” into such different urban landscapes and contexts as Santiago de Chile, Taipei, Moscow, Abu Dhabi or New York, and he tours the interactive installation “Nachlass” that portrays eight people who have not much time to live. In “society under construction” he invites up to 300 spectators to impersonate the conflicts on one of many oversized construction sites. In 2018 he created a humanoid robot to perform as a clone of the german writer Thomas Melle in “Uncanny Valley”

In 2005 Kaegi won the jury-prize of the festival “Politik im Freien Theater” for Mnemopark. 2010 Kaegi was awarded the European Prize for Cultural Diversity. In 2011 the jury prize for “Radio Muezzin” in the Theatre Festival Sarajevo, and hei curated the "idiom"-section of "Malta" Festival Póznan. 2015 Remote Moscow was nominated for the Golden Mask in Russia. And in 2018 he won the Grand Prize of Bitef Festival Belgrade for “Nachlass”.

Kaegi co-produces works with Helgard Haug and Daniel Wetzel, under the label “Rimini Protokoll”. Rimini Protokoll's purpose is to pry apart the sense of reality and present all its facets from unusual perspectives. In this way, the trio of directors reproduced the full session of the German Parliament using 200 citizens from Bonn (“Deutschland 2”). In “Deadline”, they presented a piece with five experts on the central European way of dying, and one in which they reconstructed the bankruptcy of the Belgian national airline Sabena in Brussels (“Sabenation”). Recent works include“Call Cutta in a Box”, a one-to-one telephone performance that takes place live from a call centre in India, “Hauptversammlung” (“Annual General Meeting”), a parasitic intervention at Daimler’s shareholders' meeting, the multi-player-on-stage-game “Best Before” (Vancouver 2010), the video-walk “Outdoors” (National Theatre of Wales 2011), various personalized versions of “100% City” (in Vienna, London, Melbourne and many other cities in with 100 local citizens on stage) and “Lagos Business Angels” with Nigerian business people (Berlin 2012), as well as "Weltklimakonferenz" (Hamburg 2014) - a simulation of the UN Conference on climate change. Currently they perform "Homevisit Europe" as an intaractive performance game in hundereds of households across the globe and work on their tetralogy „Staat 1-4“ on phenomena of post-democracy. The CCCBarcelona and the MAAT Lisbon recently showed their bio-installation „Win < > win“ in Lisbon.

In 2007, Rimini Protokoll was awarded with the Faust Theatre Prize. In 2008 it received the European prize “New Realities in Theatre”, and in 2011 the Silver Lion at the Venice Biennale for performing arts. Both “Call Cutta in a Box” and the “Weltklimakonferenz” got a honorary mention by the jury of Ars Electronica. The multi-player video-installation "Situation Rooms" about the weapon-industry got the Excelence award of the 17th Japan Media Festival in 2013. And in 2015 Stefan Kaegi and Rimini Protokoll got the Grand Prix Theater/Hans-Reinhart-Ring.
When he is not travelling Stefan Kaegi lives in Berlin, where Rimini Protokoll have their office.