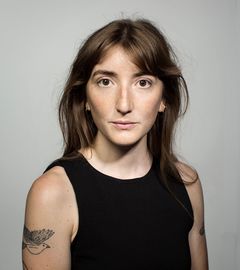 After a Bachelor's degree in Visual Arts at ECAL, Fleur Bernet begins her work as a set designer in 2019. She designed the set and costumes for « Mama » by Margot Van Hove, which won the Premio prize the same year. Since then, she obtained her Master's degree in stage design at La Manufacture and has designed sets for various directors such as Dylan Ferreux in « Neil », Anouk Werro in « Vautours », Juliet Darremont in « Toutes les petites choses que j’ai pu voir » et Jeanne Kleinman in « Meliàn 2856 ». She participated as a set designer in the short film « Doosra » by Keerthigan Sivakumar, which won the prize for excellence in Visual Arts as well as the main prize "Upcoming" at the Solothurn Film Festival. One of her latest scenography is for « Ainsi va la vie » by Samuel Perthuis, created by the TLH in Sierre. She is also Philippe Quesne's assistant for "Fantasmagoria" and works with Daria Deflorian and the students of La Manufacture class L on the set design for their show "En finir".

Her personal research aims at understanding how spaces have something more than walls and a floor. What singular atmosphere emerges, how she projects stories, how she feels physically and emotionally? She uses these singularities, which she calls the "charge" of a space, to imagine her scenographies.