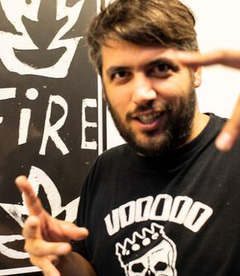 Since 2009, he has exhibited his work all over the world, including at the Sydney Biennale, the Rencontres d'Arles, the Musée de l'Elysée in Lausanne, the Kunstmuseum Bern, the Daegu Photography Biennale, the MBAL, the Tinguely Museum in Basel and the Shenzhen Biennale of Independent Animation.

He has received various awards, including the Prix international de la photographie de Vevey, the Swiss Art Awards and the Prix Fondation Latour.

In 2019 he had two major solo exhibitions in São Paulo and Milan, with curator Adelina von Fürstenberg.

In his vibrant exploration of total art, he collaborates with numerous artists, punks, models, musicians and friends, as well as with institutions such as the Théâtre de Vidy in Lausanne, where he created three plays: Rentrer au volcan in 2015, L'âge des ronces in 2017 and Voodoo Sandwich in 2020 with contortionist Niklas Blomberg. In 2018, he directed a series of twelve stop-motion short films with director and clown Martin Zimmermann, entitled Mr Skeleton.

He has published several books and made numerous music videos and album covers for bands such as Louis Jucker, Emilie Zoé, The Young Gods or his own bands Gängstgäng and CHRUCH.

Often abroad, he is based in a small village in the Swiss countryside, where he uses his large house as an open art studio and residence.