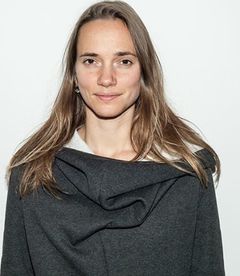 Ilse Ghekiere is a Belgian artist and art historian who works as a dancer, performer, writer and educator.

As a dancer she has worked with choreographers such as Michèle Anne De Mey, Mette Ingvartsen and Jan Martens. As a guest-teacher she gives lectures and workshops concerning her master dissertation, which researches the Flemish iconographic toddler television program Tik Tak and its performative potential. As a writer she publishes academic articles and writes fiction.

Recently she co-wrote a feature movie with the Norwegian director Kim Hiorthøy. She is also a member of the Stockholm-based collective Together Alone. Their performances use the stage as a place to reflect upon socio-political issues such as gender and normativity in a non-binary sense.

Since the beginning of her artistic career, she has been interested in the relation between sexuality and performativity. Her early performances were shown in a visual art context and revolved around eroticism, the image of ‘the young girl’ and the gaze of the audience. Later on, she questioned this approach, and its subject, and used her academic studies to critically transform her artistic practice and her role as a female dancer. In conjunction with her academic studies in Archaeology and Art Sciences, the notion of sexuality and performativity was enriched with new ideas concerning intergenerational exchange, cultural heritage, gender studies and educational sciences. This multifaceted research forms the basis of her current work as an artist and educator.