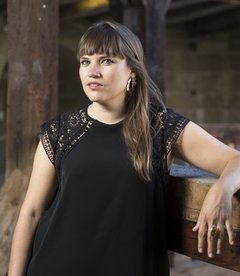 Laurence Wagner (1984) graduated in French Literature, Art History, History and Aesthetics of Cinema from the University of Lausanne as well as from the Geneva University of Art and Design (HEAD), where she obtained her Master's degree in CCC studies (Critical Curatorial Cybermedia) in 2011.

Since then, she has been an assistant at Mamco in Geneva, the Swiss Institute for Contemporary Art in New York, FRAC Île-de-France Le Plateau in Paris and the Swiss Arts Council Pro Helvetia in Zurich.

She was a programmer (and much more) for the TU-Théâtre de l'Usine in Geneva for four seasons (2014-2018). During this period, she notably won the FMAC grant from the City of Geneva for her work in cultural mediation (2015) and was a juror for multiple institutions and festivals such as the Zürcher Theater Spektakel, Premio, Embassy of Foreign Artists, HEAD, Prix Suisse de la Performance, Belluard Festival, Corodis, State of Geneva.

Since 2018, she coordinates the residency program Watch & Talk of the Zürcher Theater Spektakel (Zürich), teaches anger at The Manufacture (Master Mise en scène), organizes events as an independent curator (for CAN, the Swiss Institute in Rome, the Swiss Salon of the Venice Biennale,...), writes about music and live arts, produces radio plays and is working on the writing of a first book of poetry and essays.

She lived in Rome after being a resident at the Swiss Institute in Rome for the year 2018/19.
Since 2019, she has been directing the Belluard Bollwerk International Festival in Fribourg.