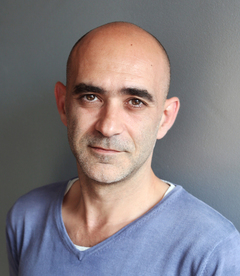 Frédéric Plazy was born in 1971 in the suburbs of Paris. He starts acting at an early age and in 1991 integrates the Regional Conservatory of Dramatic Art in Grenoble. At the same time, he pursues academic studies in astrophysics until the Doctorate. In 1997, he definitely chooses theatre over physics and starts an acting career that will bring him to play in over 20 shows until 2011.

In 2000, he creates and runs "Les Chantiers Nomades", a centre devoted to continuing education and research in the fields of theatre and cinema, aimed at professional artists.

In January 2011, he becomes director of The Manufacture – Haute école des arts de la scène of French-speaking Switzerland with a mandate to open it to performing arts and develop its international presence.

In November 2020, he is appointed Head of the Music and Performing Arts Department of the HES-SO, which comprises more than 1,200 students at three universities.