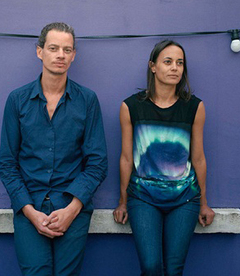 Since the creation of the Company 7273 (2003), Laurence Yadi and Nicolas Cantillon have developed a dance style that invites the body to continuously and endlessly unravel. Their research is inspired by the specific Arabic music system of Maqâm. Each maqâm describes a "tonal-spatial factor" or a set of musical notes and the relationship between them. It allows the musician to play in-between the notes and gives him the opportunity to express himself. Named multi styles FuittFuitt by the choreographers themselves, the transfer of this technic into the body ables the movements to weave into each other in a wavy, spiraled and hypnotic dance.

Through their career, Laurence Yadi and Nicolas Cantillon created about 20 pieces: from silent ones to danced-concerts, from duets to group pieces, all of which they toured internationally (Africa, Asia, United States, Europe, the Middle East and Russia).

The choreographers regularly give sessions of workshops in Switzerland and abroad. They are also invited to teach the multi styles Fuittfuitt to young dancers in professional training.

In 2014, they published a book, diary for some or guide on the practice of the multi styles Fuittfuitt for others, the ways to approach it are endless.

Laurence Yadi and Nicolas Cantillon won several awards: Swiss Prize for Dance and Choreography, and the Fondation Lietchi for the Arts.