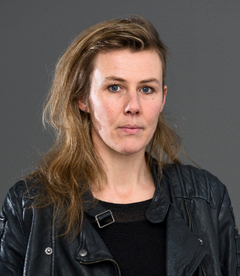 Born in 1973 in Zurich, Maya Bösch stands out today on the artistic and cultural scene by the exploratory and innovative character of the theatrical forms she designs.

After studying directing at Bryn Mawr (Pennsylvannia, USA), she founded the sturmfrei company in Geneva in 2000. With the company, she has developed more than thirty creations, including theatre, performance, installation, exhibition and also cinema.

In parallel to her creations, Maya is developing an editorial project, a series of four publications entitled: ON SPACE (2014), ON BODY (2016), ON SOUND (2019) and ON TIME (planned for 2020) which reveals her approach, research, visions and perspectives.

From 2006 to 2012, Maya Bösch directs with Michèle Pralong the GRÜ / Transthéâtre Genève, an experimental and multidisciplinary theatre stage. In 2011 and 2014, Maya programmed two performance art festivals entitled Jeter son corps dans la bataille and the 17th edition of the BONE Festival in Bern where she invited artists from French-speaking Switzerland and abroad.

Maya Bösch has been awarded several grants and the Swiss Theatre Prize in 2015 by the Federal Office of Culture for her work as an artist, director and curator.

Since 2012, Maya Bösch has been regularly invited to give workshops in universities for directing, acting, aesthetics and performance; notably at the Théâtre National de Bretagne in Rennes, L'ENSATT in Lyon, Arts2 in Mons. She participates in numerous professional platforms, juries, and intervenes on post-dramatic theatre, performance and experimental and new forms and aesthetics.

In 2020, she directs the graduation show of the Bachelor in Theatre's Class K, "Sur la voie royale", based on the eponymous play by Elfriede Jelinek.