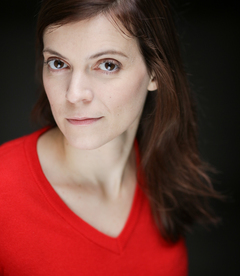 As a child, I intensively practised drama and dance. Concurrently with my studies of Russian and a Master's degree in English literature and civilisation, I intensified my theatrical training with internships in Burgundy. In 2009, I spent one year in Edinburgh University on an erasmus exchange. In 2012, I graduated from the Conservatory of Lyon (graduation certificate in drama) and from Lyon's University (Bachelor of Arts in perfoming arts). Finally, in 2015, I graduated from the Manufature (Bachelor of Arts in Theater). In Lausanne, I also started stage direction and put up two plays with Thomas Lonchampt ( Mamma Medea by Tom Lanoye and Shakespeare's Richard III ).
Since I left school, I worked twice with Jean-François Sivadier (Talents Adami paroles d'acteurs 2015 and Ecrits d'acteurs at the festival d'Avignon 2016).
I also founded the Compagnie du bout des yeux with Thomas Lonchampt and put up our fisrt play "Angèle et Anatole" at the Pulloff Théâtres in Lausanne in october 2016. The play also took place at the Théâtre du Pommier in Neuchâtel in 2017 and during the festival le Printemps des compagnies at the Théâtre des Osses in Fribourg in 2019.
I worked twice as an actress for children concerts (Orchestre de chambre de Lausanne and Haute école de musique).
In 2017, I assisted the stage director Guillaume Béguin (Où en est la nuit? created in the Vidy Theater) and I played in Jardin Secret put up by Jean-Michel Rivinoff (in the castle of Talcy in France).
Ever since, this play keeps touring in France and I was hired by this company to organise workshops with children.
In 2019, I am assisting again J.M Rivinoff for his new play: L'entretien and Krach by P. Malone put up in Blois at the Halle aux Grains.