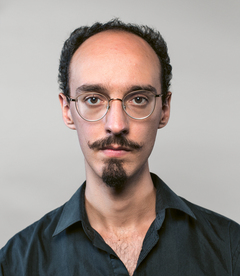 Born in the Latin Quarter in Paris to an Italian mother and a Spanish father, he spent his youth there and studied at the École normale supérieure. There he trained in theatre and philosophy and studied under the direction of Anne-Françoise Benhamou and others (Daniel Mesguisch, Lionnel Parlier, Lionel Gonzales, Thierry Thieu-Niang). He also studied acting at the Paris conservatories and then at the Studio Théâtre d'Asnières. He translates and performs in Italian (Pinocchio by Carmelo Bene) and Latin American plays (Argumento by Santiago Sanguinetti), thus joining the De-vol-veremos collective.

Following his studies in acting, he began directing with the Théâtre des Opérations group. In 2018, he joins the Master in Theatre orientation Stage Direction at La Manufacture, where he extends his stage experiments by meeting with Maya Bösch, Philippe Gladieux, Marie-Josée Malis and Célie Pauthe, among others. For his graduation work, he focuses on the staging of a poetic language by proposing an adaptation of Henri Pichette's Epiphanies.