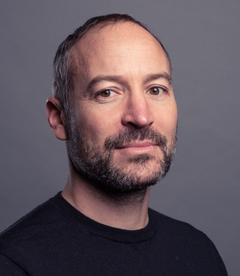 After studying literature, Christian Bovey divides his time between scenography and drawing projects, as well as teaching art. During these years, he also worked for the festival Visions du Réel where he sharpened his cinematographic eye, and then in a psychiatric unit of the CHUV where he led an art workshop where he developed his taste for creation in the unexpected and the offbeat. He continued his studies by completing a CAS in dramaturgy, before finally joining the Master in Theatre in Scenography at La Manufacture.

The practice of drawing has always been at the heart of his artistic work, both as a tool for understanding and interpreting the world, but also as a primary gesture of creation. With the Marie-Louise collective, he sets up numerous exhibitions and public interventions linked to drawing. As for scenography, he conceives it in the broadest possible way, as a meeting place for all the domains and issues of theater. He has notably collaborated with Christian Denisart, Valentine Sergo and Joël Maillard.