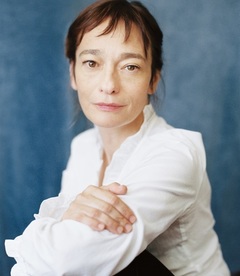 Elina Löwensohn is a cosmopolitan actress born in Romania, American and living in France. She crosses films, videos, photos, performances and theater plays with a pronounced taste for metamorphosis. She began her career in the 90s, on the independent theatre and film scene in New York: Simple Men, Amateur and Fay Grim (Hal Hartley), Basquiat (Julian Schnabel), Nadja (Michael Almereyda)...

Her taste for performance has led her to work with artists such as Marceline Delbecq, Tom de Pékin, as well as filmmaker Bertrand Mandico, for whom she has appeared in several films: Boro in the Box, Living Still Life, Notre Dame des Hormones, Les Garçons Sauvages, Ultra Pulpe, and soon After Blue. With the latter, she imagines a series of polymorphic films and creations, based on the idea of the mise en abîme of the actress - director relationship (a series of 21 films over 21 years) of which 9 shorts have been made.