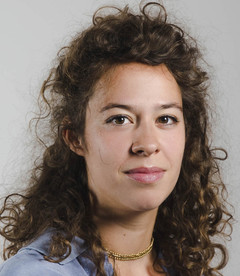 Eléonore Bonah, grew up between rural Plaine valley in the Vosges mountains and Strasbourg. After studying literature and philosophy in Paris, combined with tap dance training with Victor Cuno, she studied acting at the Ecole Internationale Jacques Lecoq in Paris, where she performed under the direction of Olivia Corsini and Serge Nicolaï. Before starting an apprenticeship as a wood sculptor in Potsdam, Germany, she meets Johan Simons in April 2018 at the Thalia Theater in Hamburg and is recruited by him for a first professional engagement in September 2018 at the Schauspielhaus Bochum as assistant director. Between September 2018 and June 2020, she mainly collaborates with Johan Simons, as well as with Tobias Staab, Karin Henkel, Koen Tachelet and Herbert Fritsch. For the 2019-2020 season she signs her first personal stage direction at Bochum Schauspielhaus with the actor Lukas von der Lühe in a project entitled " The Earth is a Ball " (Die Erde ist eine Kugel), for which she also elaborates the set design. At the same time she meets in Bochum Julian Rosefeldt and participates in the preparation of his opera "Szenen aus Goethes Faust" at the Opera Ballet Vlaanderen with the shooting of his film "Penumbra". In September 2021, Eléonore Bonah joins the Master “Théâtre orientation Mise en scène” at La Manufacture in Lausanne. Since then, she has engaged a collaboration with Giulia Rumasuglia for her OUT "Cassandre peut-être" and as part of an exchange with the school ESAD du TNS in Strasbourg a collaboration as dramaturge on a 3rd year student-stage director project. Furthermore, she is hired by Philippe Grandrieux as assistant director for his next opera “Tristan and Isolde” at the Opera Ballet Vlaanderen in Antwerp in Belgium for the season 2023.