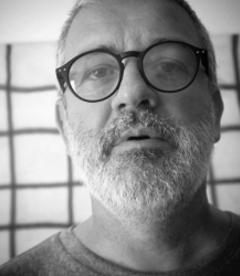 Gwenaël Morin follows a training as an architect during which he begins his theatre practice. At the end of his studies, he became assistant to Michel Raskine for three years (1996 - 1999) and staged his first shows Débite! (allez vas-y) based on Arthur Adamov's End of August and Pareil Pas Pareil with love dialogues taken from Jean-Luc Godard's films. He stages texts by Strindberg, García Lorca or Camus.

In 2009, he moved to the Laboratoires d'Aubervilliers where he initiated with Julian Eggerickx, Barbara Jung and Grégoire Monsaingeon the experience of Permanent Theatre, based on three principles: play every night, rehearse every day, transmit continuously. During one year, he works the repertoire with plays whose title is the name of the main character : Lorenzaccio, Woyzeck, Bérénice etc.

From 2013 to 2019, he directs the Théâtre du Point du Jour in Lyon where he continues the Permanent Theatre.