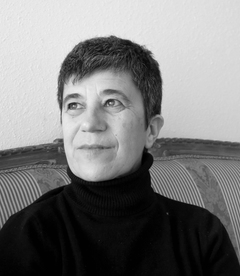 Born in 1963 in Irun, Spain, Esperanza López is an actress, stage director and teacher.

She trained as an actress at the Serge Martin Theater School in Geneva, and with various professionals in France and Spain. She co-founded the company LEGALEÓN-T TEATRO in 1986. From the year 1997 and until today, she works with the company L'ALAKRAN-OSCAR GÓMEZ MATA. The tours of the shows take her to France, Switzerland, Italy, Spain but also to Mexico, Argentina, Brazil and Colombia.

As a actress, she also collaborates with other companies: ANTZERKIOLA IMAGINARIOA (FTI) from Bilbao, L'HOMME DE DOS from Geneva. She also stages with Basque companies: BEHIBI'S, KOLEKTIBO MOSTRENKO and TRAPU ZAHARRA; from Malaga: AL FRESKITO and CUESTA ARRIBA PRODUCCIONES; and from Barcelona: AYAYAY; but also in France with the companies DU SENS OPPOSÉ and ZART in Toulouse and ROUGE ÉLEA by Hendaie.

She also leads courses for professional actors and actors in training within different centers, companies and theater schools.