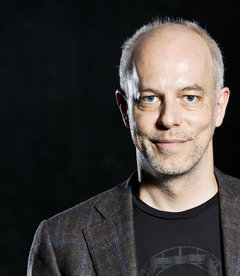 The work of stage designer and director Dominic Huber (born in 1972) opens new zones of the performative. His preferred sites are spaces that not only can be seen by the audience, but entered and experienced by individuals or entire groups. Very much in the sense of augmented reality, they work on expanding experiences of the senses, artistically modifying, activating, and manipulating actual spaces and situations. As a result, the audience actively engages with and explores surprising characteristics of their surroundings.

After studying architecture at the ETH Zurich Dominic Huber teamed up with light designer Christa Wenger and founded the company blendwerk GmbH. From 1999 he developed his own work as a stage designer for independent productions and theatres in Germany and Switzerland.

With Rimini Protokoll Dominic Huber developed the scenographic multiplayer-installation "Situation Rooms" in which the audience enters the subjective perspective of protagonists in a world of weapons using Ipads and headphones in a labyrinth-like scenography. "Situation Rooms" tours the world after the premiere at the Ruhr Triennale in 2013 and was invited to the Berliner Theatertreffen and was awarded the Japan Media Excellence Award.

Dominic Huber regularly teaches at ZHdK - the Zurich University of Arts and gives workshops in many countries. In 2019 he was awarded the “Theaterpreis” by the Swiss Federal Office of Culture for his scenographies.