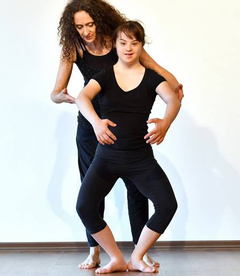 Swiss choreographer and interdisciplinary artist engaged in the research and development of new writings in dance movement, performance, video art and plastic arts. Ela Franscella works between Locarno and Paris.

After a training and a professional career as an independent artist in the field of visual communication, she turned to body expression. She undertakes a training in "Psycho-corporal Structuring and Dance Therapy" and intervenes in Swiss Psychosomatic clinics and with disabled people. She is trained in "Mouvement d'Expression Artistique Laban-Decroux" and deepens her study on the states of the body through butô and contact-improvisation dance.

In search of an integrating choreographic language, Ela Franscella develops an artistic project around autonomy and creativity in danced movement for young adults with Down Syndrome, during which she designs an alphabet and an original method for dancers with Down Syndrome.

After having created an Artistic Cultural Centre at Monte Verità in Ascona (Switzerland) in 2006, she designed the "Icosahedrum" in 2008 for the "Laban Event '08" that she organised for the 50th anniversary of Rudolf Laban's death. This object, which allows the education of movement, is exhibited and used at the LIMS (Laban/Bartenieff Institute of Movement Studies) in New York, at the CND (Centre National de la Danse) in Paris-Pantin and at the Laban Center London. The Icosahedrum has also been presented at the Conservatoire de la Danse de Strasbourg and at the Théâtre de la Ville de Paris on the occasion of the evening "Les chorégraphes et la notation".

In 2008, she created her own dance company, Mops_DanceSyndrome, composed solely of dancers with Down Syndrome, with which she develops artistic projects and exchanges. The creations are presented at various international culture and dance festivals.

She has directed several short films, including Mops_AcediaDance (2011), Mops_MAD (2012) and Libera me (2013), with the participation of the company's dancers. The videos have been screened at short film festivals and in art galleries. In 2012, RTS produced a 50-minute documentary on the life and work of the artists of the Mops_DanceSyndrome Company: "La danse des Mops" by Mirto Storni.

Ela Franscella, under the pseudo/anagram Elfa nel Sacral, continues her personal creative work on choreographic and visual arts works and installations in parallel with the Mops_DanceSyndrome company.