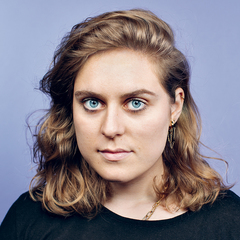 After a literary baccalaureate with a major in music, Charline Curtelin went on to a Class Préparatoire Littéraire aux Grandes Écoles (CPGE) specializing in cinema, followed by a Master's degree in cinema at the Sorbonne Nouvelle University. At the same time, she joined Jean Marc Popower's Dramatic Art class at the Conservatoire du 9ème arrondissement de Paris, where she directs and participates in collective projects. She continues this training at the conservatory of the 14th arrondissement of Paris in the class of Agnès Proust. In 2018, she founded the company Humeurs Massacrantes, which she co-directs and with which she wrote and directed her first show #Dansern'estpasuncrime. In September 2020, she joins the Master's degree in Stage Direction at La Manufacture.