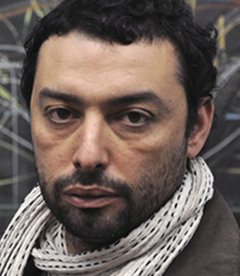 Shady El Noshokaty is a contemporary Egyptian artist born in Damietta City in 1971, whose projects were featured in Contemporary Art Museums and international exhibitions around the world, such as the Venice Biennial, Hayward Gallery, Mori museum, Kunst museum in Stockholm, Bochum, Arab World Institute in Paris, among others.

He also works as Associate Professor in the Department of the Arts in the American University in Cairo. He was an executive curator for Ahmed Basiony’s art project (30 days Running in the place) for the Egyptian pavilion at the 2011 Venice Biennial.

Shady El Noshokaty has also played an important role in the field of Art Education in Egypt during the last decade. He created his annual media art education - parallel experimental program, as a summer workshop at the Faculty of Art Education - Helwan University, for 12 years from 2000-2012.

In 2010 he established ASCII - Foundation for Contemporary Art Education, a research center & Interactive New Media Art lab & library which aims to educate and develop young thinkers and researchers’ experiences in new and alternative Media Art practices and creativity in Egypt.