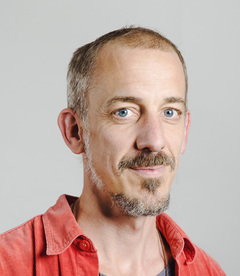 Gregory Stauffer (CH) is a performer, choreographer and teacher. He performed from 1996 to 2003 in an experimental noise formation. Between 2000 and 2001 he started and abandoned his studies at the Geneva School of Fine Arts. He lived one winter in an hermitage in the Jura Mountains learning wild and medicinal plants, before training and graduating from the Scuola Teatro Dimitri in Verscio in 2006. He received the award for best diploma with I Racconti del Paesaggio.

He worked as an interpreter for Anne Hirth's Büro für Zeit + Raum in Berlin, for which he won the prize for the most outstanding personality of the festival in the Kontrapunkt 2008. He founded the company Le cabinet de curiosités in Geneva in 2009 with which he creates in a mobile territory between dance, performance and video.

He experiments in situ with the perceptive body as an intuitive and relational subject. Listening is at the heart of which are born minimal and sensitive creations, thought through a holistic and humorous practice.

He tours in Switzerland and internationally and his work was presented at the Swiss Contemporary Dance Days in 2013, 2015 and 2017. He was an associate artist at the Arsenic – Centre d'art scénique contemporain in Lausanne from 2018 to 2020, where he created the perennial platform Tuesday is Danceday. From 2007 to 2018 he was a member and co-founder of the video-performance collective Authentic Boys (NL, D, CH).

He teaches regularly at La Manufacture, as a mentor for Bachelor's works, as a referent teacher and as a teacher of in situ performative practices. He is also invited in Geneva at the HEAD, at the CFPArts, at the Collège Alice Rivaz, in Lausanne at the Marchepied, and in Verscio at the Scuola Teatro Dimitri.

Gregory is currently training at the Tamalpa Institute in Freiburg im Breisgau, and directs the research project "Sustainable processes in the performing arts" at La Manufacture.