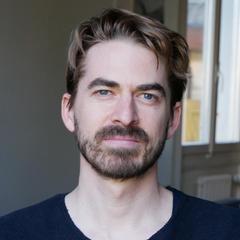 Mathias Brossard is a director and actor. He obtained his Bachelor's degree in theatre from La Manufacture in Lausanne in 2015. Since then, without stopping acting, he has cultivated his taste for directing, assisting Denis Maillefer, Nicolas Stemann, François Gremaud, Jean-Louis Johannides and François-Xavier Rouyer.

In 2014, he co-founded La Filiale Fantôme, a production structure that supports their various joint projects. Mathias develops a theatrical practice in situ in collaboration with the vast team of performers of the CCC collective. In particular, he initiated a long-term project based on Chekhov's Platonov, performed by fifteen actors in the open air in the heart of a forest. Or the adaptation of a comic strip by Brecht Evens, Les Rigoles, which invites different small groups of the public to wander around the city to discover 3 fictions that intersect and are played out in parallel.

This season, Mathias Brossard will perform with the BPM collective in "Vers l'Oiseau vert" at la Comédie de Genève and on tour in French-speaking Switzerland, as well as in "Bundren!" another in-situ project by the CCC collective, directed by Loïc Le Manac'h.