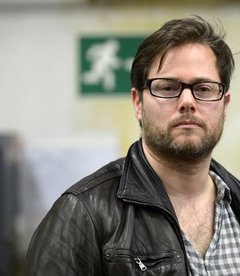 Rau was born in Bern, Switzerland. He studied sociology, German and Roman studies in Paris, Zurich and Berlin under Tzvetan Todorov and Pierre Bourdieu, among others. He started his first reporting trips in 1997. From 2000 he worked as an author for Neue Zürcher Zeitung, and from 2003 as a director and writer at home and abroad with, among others, the Maxim Gorki Theater in Berlin, Staatsschauspiel Dresden, Hebbel am Ufer Berlin, Theaterhaus Gessnerallee Zurich, Teatrul Odeon Bucharest and Beursschouwburg in Brussels.

In 2007, Rau founded the theatre and film production company International Institute of Political Murder (IIPM) which he has been running ever since. The company was founded with a focus on documenting the last hours of Elena and Nicolae Ceaușescu, who were executed on December 25, 1989. Over time, it developed into an institution that focused on documenting notable historical global events through the mediums of films, literature, documentaries and research papers.In September 2010, Nicolae Ceaușescu's son sued IIPM demanding they cease the use of his family name Ceaușescu.

Rau's theatrical works and films have been invited to some of the biggest national and international festivals, including in 2012-2013 the Berliner Theatertreffen, Noorderzon Performing Arts Festival Groningen, Wiener Festwochen, the Kunstenfestival in Brussels and the Radikal jung Festival, where he was awarded the critics' prize for direction. Alongside his work for stage and film, Milo Rau lectures on direction, cultural theory and social sculpture at universities and colleges. His productions, campaigns and films have been invited to the Festival d’Avignon among others and nominated for the Prix de Soleure, while also touring the world. The Swiss newspaper Tagesanzeiger recently named him one of today’s "most sought-after directors," with the German weekly Der Freitag calling him “the most controversial theatre director of his generation”.