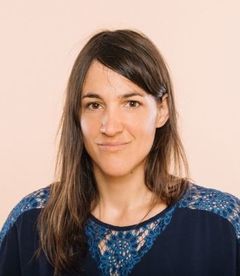 Yasmine Hugonnet is a dancer and choreographer. She is interested in the relationship between form, image and sensation, in the germination of the imagination, in the (de)construction of choreographic language, in the process of incarnation and appropriation.

Born in Switzerland, she entered the Conservatoire National Supérieur en Danse Contemporaine de Paris at the age of thirteen. At the same time, she became interested in contact dance, improvisation, Butô and choreographic research.

From 2009 to 2013, she engaged in a long period of solitary research in Lausanne and created her company Arts Mouvementés. She produced several shows: in 2013 Le Rituel des Fausses Fleurs, in 2014, Le Récital des Postures, which won the Swiss Dance Prize 2017, and had an international success, La Ronde-Quatuor in 2016 and the solo Se Sentir Vivant in 2017. Since 2018 she has been accompanied by the Théâtre Vidy-Lausanne, where she created Chro no lo gi cal in 2018 and the performance Extensions in 2019.