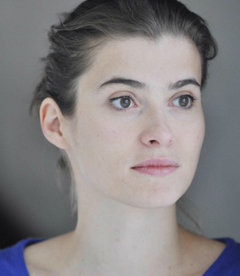 Before taking an interest in theatre, Anne Schwaller trained as a pianist at the Conservatory of Fribourg. She began her theatrical training in Belgium, at the Institut des Arts de Diffusion (IAD), then completed it in Lausanne at La Manufacture, under the direction of Yves Beaunesne. After graduating in 2007, she met Gisèle Sallin, director of the Théâtre des Osses the same year. For six seasons, she worked actively with the troupe of the Théâtre des Osses in Givisiez, not only on stage but also around the stage, getting involved in all the trades that make up a theatre.

Parallel to her work as an actress, she is also interested in directing. In 2010, she assisted Gisèle Sallin in directing Molière's Les Femmes savantes; in February 2011, she was Philippe Adrien's assistant for the direction of La Tortue de Darwin, by Juan Mayorga, a Théâtre des Osses production. In autumn 2012, she directed her first production with Léonce et Léna by Georg Büchner at the Théâtre de Carouge. This was followed in 2015 by the production of On ne badine pas avec l'amour by Alfred de Musset, which travelled throughout Switzerland the following year. In 2016, she adapts Shakespeare's Hamlet for two actors. In 2018, she signs the show Claudel(s), a theatrical encounter between Paul Claudel and his sister Camille Claudel.

Since 2014, she has been collaborating with Julien Chavaz in the creations of the Fribourg lyric troupe, Opéra Louise. Their latest creation is entitled Moscow Paradise, based on the work of Shostakovich.

Anne Schwaller also develops another facet of her work, focused on pedagogy and transmission. Since 2010, she has been a public speaking coach and gives public speaking workshops at La Manufacture.