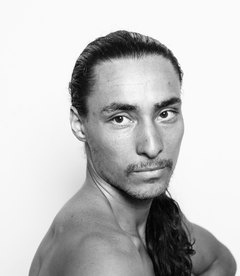 Cédric Gagneur studied breakdance, contemporary dance and classical music, notably at the Geneva Junior Ballet. Since 2013, he works as a dancer for Rafael Smadja’s Cie Tenseï and creates his first solo Labyrinthum in 2016. The following year, he finishes the Bachelor in Contemporary Dance directed by Thomas Hauert at La Manufacture de Lausanne and creates Cie Synergie in Meyrin, with the aim of cooperating and creating performances with other artists. In 2017, he created Palette(s) with Marc Oosterhoff and in 2018 he continued his collaboration with Rafael Smadja for the creation Sheol at the CDCN Les Hivernales in Avignon. The sound artist Julie Semoroz proposes a collaboration for the creation We need space which will premiere at the Grütli Theater in March and April 2019. Cédric is part of the YAA program! of Pro Helvetia and will be a young artist associated with the ADC in Geneva for two years.