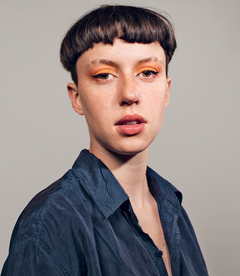 Emmelien was born in 1999 in a small village in Northern Israel. There from the age of 9 she started taking classes at the dance school of the Kibbutz Contemporary Dance Company in Ga’aton. Soon the hobby became a passion that brought her to taking weekly dance classes spread over the country. At the age of 13 she was chosen to participate in Jay Augen’s ballet classes in Haifa together with starting the student excellence course of the KCDC (where ballet, Graham and the company’s repertoire classes are given). In 2015 she was taken to join the BatSheva students’ excellence group in Tel Aviv where Gaga and the company’s repertoire were taught. In 2016, she moved to Ghent, Belgium, to finish high school in Muda Kunstencentrum. There she was introduced to the Belgian as well as the European contemporary dance scene. During the summers she participated in summer courses at KCDC, the Israeli Ballet, De!Kunsthumaniora in Belgium, Eastman summer intensive directed by Sidi Larbi Cherkaoui, and in Henny Jurriens Stichting in Amsterdam with David Zambrano. In 2018 she entered La Manufacture and started discovering and creating her own way of moving, being inspired by cats, her classmates and workshops given.